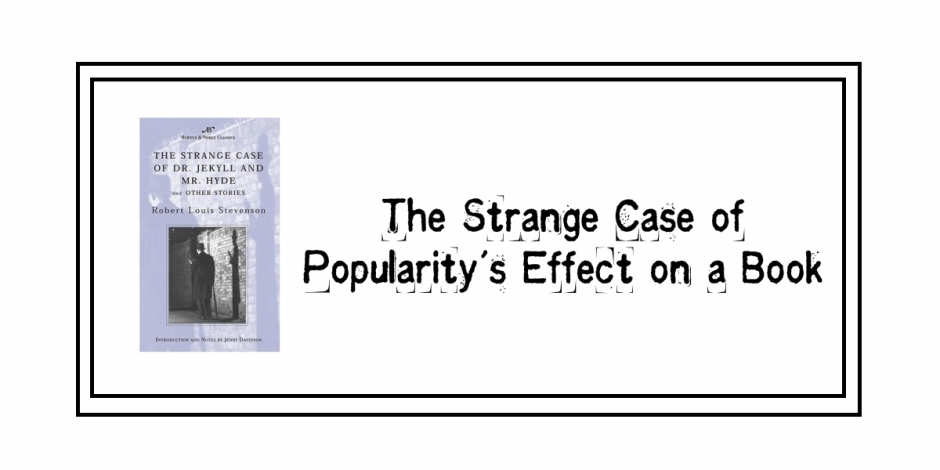 In which I discuss whether or not one’s enjoyment of a book can be marred by its achieving cliche status.

I’ve always wanted to read The Strange Case of Dr. Jekyll and Mr. Hyde, but despite its being a very short book, and despite the fact that it’s been sitting right there on my shelf for almost a year, I just never really got around to it. My brother had read it, and because we usually have pretty similar opinions on books, I asked him if he recommended it. I was surprised by his response.

He said it was all right, but that it would have been better if you didn’t know that Dr. Jekyll is Mr. Hyde (sorry, spoiler I guess, but I’d be seriously surprised and impressed if you’ve managed to get this far in life without having that spoiled, because it’s literally a saying at this point). The point of the story, he said, was to get to that twist ending, that resolution of the mystery. And if you already know that, there’s really no point.

Now, I do value my brother’s opinion, but it’s such a short read that I figured I might as well read it for myself anyway. And while I disagree a little bit, I definitely see where he’s coming from.

First of all, it should be said first that it’s very much worth reading, despite the fact that the main plot of it, which is the mystery, probably won’t be a mystery to you at all.

For one thing, it is so short. For another, this gem alone would be worth reading a much longer book for:

Besides that, there is more than one way to read this story. As pure entertainment, this story is fast-paced, exciting, and genuinely creepy. Who doesn’t love to shudder at a murderer lurking (or should I say “hyde-ing”…okay, no, sorry) in the fog-thick Victorian London nights? Classic.

But there’s a deeper message too, if you want to analyse the story that way. In his written statement, which forms the last chapter, Dr. Jekyll explains that he spent years repressing all of his most base desires, and even things that weren’t bad, such as “a certain gaiety of disposition,” in order to be a virtuous man who displayed a “more than commonly grave countenance before the public.” He makes it clear that, while all of us have to push back against the evil within us, there was an even greater gap in himself than in most between “those provinces of good and evil which divide and compound man’s dual nature.” And because of this, it wasn’t only scientific curiosity that spurred him to create Hyde. It was also a way to finally, in his old age, get to live out all of the evil, reckless temptations he had always denied himself, while keeping the Jekyll identity more pure than ever before, completely ridding it of all evil. But the more he switches back and forth, the more the lines begin to blur, and soon he starts turning into Hyde involuntarily.

My two natures had memory in common, but all other faculties were most unequally shared between them. Jekyll, (who was composite) now with most sensitive apprehension, now with a greedy gusto, projected and shared in the pleasures and adventures of Hyde; but Hyde was indifferent to Jekyll, or but remembered him as a mountain bandit remembers the cavern in which he conceals himself from pursuit. Jekyll had more than a father’s interest; Hyde had more than a son’s indifference.

So we can see that his original intention was not fulfilled. He intended that “the just could walk steadfastly and securely on his upward path, doing the good things in which he found his pleasure, and no longer exposed to disgrace and penitence by the hands of extraneous evil.” But instead, we see the supposedly wholly good Jekyll “with a greedy gusto” enjoying the exploits of Hyde. But it doesn’t go both ways. The evil of Hyde is starting to seep into Jekyll, but none of the good of Jekyll makes his way into Hyde. So he realises what is happening and tries to stop, but after a while, he can’t help but let his bad impulses overwhelm him, and he transforms again. And then the more he gives in, the more powerful Hyde becomes. In fact, when he first transforms into Hyde, he notices that he’s very short, and he explains it this way:

The evil side of my nature, to which I had now transferred the stamping efficacy, was less robust and less developed than the good which I had just deposed. Again, in the course of my life…it had been much less exercised and much less exhausted. And hence, as I think, it came about that Edward Hyde was so much smaller, slighter, and younger than Henry Jekyll.

But later, as we see the Hyde starting to seep into Jekyll, we also see Hyde grow just slightly taller. This is a way to show us that he’s gaining in strength, and he continues to do so until, in the end, Jekyll has locked himself up for fear of what he might do, and whenever he drifts to sleep or otherwise lets his guard down, he automatically switches to Hyde, and he has to keep upping his dosage to bring himself back, until finally he runs out of the salts he needs to concoct his chemical, and turns into Hyde once and for all.

So you could interpret this as saying that the more we exercise our less noble impulses, the stronger they will become, and the more they will start to take over even the good parts of who we are.

So in short, The Strange Case of Dr. Jekyll and Mr. Hyde is definitely worth reading, and definitely has a lot of interesting things to say. And even if you already know the answer to the mystery, it’s still a pretty entertaining read with some great quotes.

Man is not truly one, but truly two.

But My Brother Had a Point

Even though I disagree that the book isn’t worth reading, he does have a point. This book would clearly be so much more effective if one were truly startled at seeing Jekyll transform into Hyde right in front of his friend Dr. Lanyon. I’m really disappointed that I’ll never get to experience that, because I’m sure it would be one of the most memorable twists I’ve read. But since it has become so iconic, with “Jekyll and Hyde” a regularly-used expression for someone who acts one way some of the time and then other times acts the complete opposite out of the blue, that obviously wasn’t surprising. The main plot is Mr. Utterson trying to get to the bottom of the mystery, but seeing him try to solve the mystery you already know the answer to just isn’t that entertaining. My only real question was, “How is he going to find out that Jekyll actually is Hyde?” even though I’m sure that Stevenson intended for us to ask, “Who could Hyde possibly be and why is Jekyll acting so strangely?” instead.

And this raises a lot of interesting questions about stories that have risen to the point of being a cliche, or just in general stories that become extremely popular. Is there a chance that the experience can be ruined by this popularity? Well, I’d say it depends.

For example, I don’t really remember watching The Empire Strikes Back for the first time, because I was so very little, but I think I kind of already knew that Vader was Luke’s father. And I think probably almost everyone knows that when they watch Star Wars for the first time. It’s such a well-known spoiler that no one even treats it as one anymore (and so I’m very sorry to any of my readers who haven’t seen The Empire Strikes Back, but I’m sure I’m not the first person to spoil it for you). It’s just part of culture. But at the same time, while it would be so cool to get that devastating news along with Luke, knowing the truth doesn’t detract at all from your enjoyment of Star Wars. While it is a great twist, it’s not like the plot of the Star Wars movies was to find out who Luke’s father was. And I think maybe that’s the difference.

With Jekyll and Hyde, finding out who Hyde is and how he’s connected with Jekyll is the entire plot. So now, seeing as pretty much everyone, whether or not they’re familiar with the story, is familiar with the concept of “Jekyll and Hyde,” you can no longer read this book for the plot. There are a lot of other things going for it and many other reasons to read it, but finding out the identity of Hyde can no longer be one of those reasons.

Thankfully for Robert Louis Stevenson, he also managed to use his story to explore some rather intriguing themes, and he succeeded in invoking a very eerie and creepy atmosphere, so it’s still a wonderful and important story, and one I would definitely recommend.

This post wasn’t meant to be a review or really an analysis of the entire book, or even to give a definitive position on whether or not my brother was right. I haven’t reached a definitive opinion yet, but it’s an intriguing topic and I want to leave it open to discussion. What do you think? Are certain types of stories ruined, or at least made less effective, by a certain level of popularity? Have you read The Strange Case of Dr. Jekyll and Mr. Hyde? Did you find that your enjoyment of the plot was marred by already knowing the ending? I’d love to hear your thoughts.