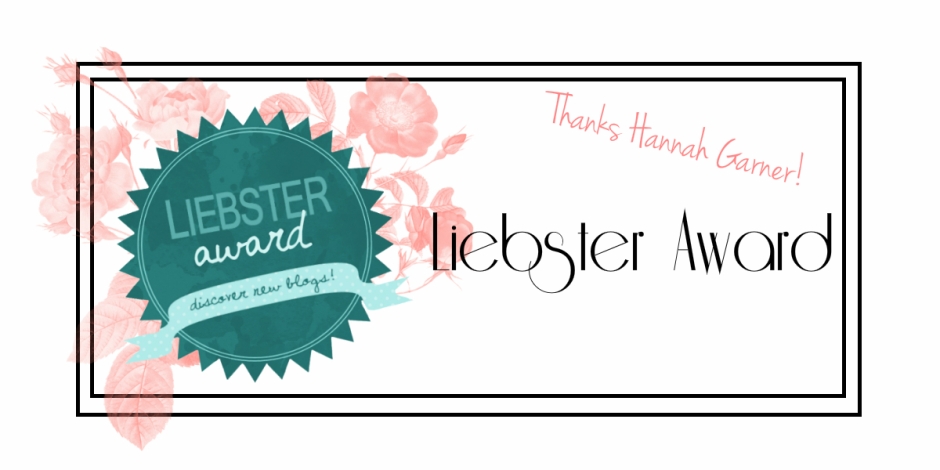 In which I answer questions with non-answers, go off on a pointless rant, and ask some equally pointless questions of you guys…you know, basically the usual.

I’ve received a few Liebster awards, but I just really love them because it seems like people come up with really great questions and I like trying to answer them.

What made you pursue writing?

What is the most important event/events that have grown you into the person that you are today?

Wow, these questions are pretty deep! I don’t know, I honestly do not know. I feel like I don’t really think in milestones. I just don’t think about the past enough, I suppose.

Describe yourself in one sentence.

I am terrible at describing myself.

If you could meet with anyone past or present who would it be and why?

These are really good questions and my answers are just… Once again, I’m sorry but I don’t know! I feel like anyone that I care about meeting would be someone I really would not want to embarrass myself in front of, and I probably would.

What are five principles that you try to live your life by?

If you could pack up and live anywhere in the world for a year, where would you live and why?

I just..I just want to live everywhere. But nowhere hot. And nowhere with bite-y poison things.

Who are your favorite authors? Why do you like their work so much?

I have way too many! I guess I’ll just say that I value authors who use the language well and who have something meaningful to say and say it. And whose characters feel real.

If you could be anything in the world, what would you be?

They’re just so incredibly happy to exist, and it doesn’t take much to make their day. A piece of chicken you dropped on the floor and your whole family marched on top of? Give that to the dog and they’re like “OH MY GOODNESS THANK YOU OH WOW BEST GIFT EVER THANK YOU I LOVE YOU THIS IS THE BEST DAY OF MY LIFE I DON’T EVEN WOW THIS IS THE BEST CHICKEN EVER YOU ARE THE BEST HUMAN THANK YOU GOOD HUMAN I WILL LOVE YOU FOREVER NOW EVEN THOUGH I LOVED YOU FOREVER BEFORE THANK YOU WOW CHICKENNNNNNN!”

Like, even when dogs have a bad day, they don’t really have a bad day, you know? My dog literally got his toe ripped off several years ago and I’m pretty sure two hours later he’d already forgotten about it. I’m sorry, but if my toe got ripped off, it would ruin that year for me. That year would forever be the year my toe got ripped off. But that’s just not how it is with dogs. As Cesar Milan always reminds people, dogs live in the present.

What do you love to do in your free time?

Write. Eat. Play games. Listen to music. Binge on Netflix documentaries about things I didn’t know I cared about.

And yelling about books.

What would you say is your biggest down fall?

No, hmm. To be serious, probably emotional stuff. I just don’t really know how to handle emotions the best, so sometimes I try and pretend I don’t have them. Being emotionless is not a virtue. It’s not something to aspire to. It’s bad. Be a human, Chloe.

(I don’t know why I started lecturing myself. That was weird.)

What would you say is your best attribute?

I would probably say the fact that I am extremely open to trying things. I love experiences. I mean, well, heh, let me clarify. Because I just know someone is going to stand up and be like: “That’s actually not true, Chloe! Chloe, excuse me!!! Chloe??? That actually isn’t true because remember that one time when actually I told you that you should try _______ and you actually didn’t actually try it?! So that’s actually not true.” I have a feeling this person is going to be loudly chewing gum while they say this, and I just want to save us all.

Okay, if it’s a really different experience from anything I have ever tried before, I have no basis to form a judgement as to whether I’m going to like it or not, so I might as well try it. Then, even if I didn’t like it, I can know I tried it.

But there’s a difference between eating baby octopodes  (which I wasn’t sure about but ended up being a great decision) and riding one of those drop tower rides.

Let’s see, a small list of things I hate:

So I can absolutely make a logical judgment with some simple mathematics (being strapped in + falling out of the sky + going fast and not being in control = THE WORST DAY OF CHLOE’S LIFE) and not waste my time on something I know from the beginning that I’m going to hate.

Not sure why that turned into a whole rant but you never know what’s going to turn into a rant with me. It just happens and we’ve got to be prepared.

I’m not doing facts this time. I’ve got to keep up some of that aura of mystery, you know? And you guys already know too much.

That’s right. Better be looking over your shoulder. It’s a dangerous position to be in, knowing too much.

Actually, I will do one fact: “octopodes” is a perfectly legitimate, although uncommon, plural for octopus. So now you know. (Other acceptable plurals are octopuses and octopi.)

(I’m a little embarrassed because Hannah Garner’s questions were so deep and well-thought-out and I have a feeling mine aren’t going to be.)

And if you don’t want to do a whole post, answer at least a couple of the questions in the comments, please. Stupid questions demand answers.

28 thoughts on “The Liebster Award”