In which I share a quote and tell the story of one of my first big obsessions.

I was tagged by the ever lovely noteablepad. I’ve told you guys how much I love her blog, but if for some reason you still haven’t had a chance to look at it, do it now. If you’re in a hurry, you can just skip this post and go look at her blog instead. It will be worth it. I’m not kidding.

I stared at my shelf a good long time for this one. I have lots of favourite quotes, of course, but I wanted to dig up something that isn’t a super obvious choice. And then I realised that with as much as I talk about Les Miserables, I haven’t told you guys about the first novel set in 19th century Paris that captured my heart: Gaston Leroux’s The Phantom of the Opera.

One day when I was nine years old, my mother took me to Barnes and Noble, and there was a display of unabridged Puffin Classics in the kid’s section. I locked eyes with this terrifying cover, and already I had begun to fall in love.

My mother told me that there was a musical about it, that she really liked it, and she thought I should read it. I didn’t need much convincing, and I started reading before we even left the store. It didn’t take me long at all to finish it, and then I read it approximately 502,945 billion more times.

As much as I loved freaking myself out with the cover, I didn’t want to look at it all the time, and so I took hot pink wrapping paper with daisies printed on it and made a cover for it out of that. It was just so wrong on so many levels, and even back then the irony was not lost on me.

After I finished the book, my mom gave me the CD, which I still have and still enjoy playing at loud volumes. My brothers and I watched every movie adaptation we could track down, and most of them were awful, but we liked the silent one and the 2005 one. Then, when I was 10, we went and saw the musical. That was one of the best experiences of my childhood.

At the climax of our obsession, we would actually act out and sing the entire musical in the backyard every day after school. (Our poor neighbours!) And I ended up getting an awful perm because I wanted curly hair like Christine. Yeah. Not my best look, that.

Anyway, this book is hands down the most beat up book on my shelf, but that’s a testament to how much I loved—and still love—it. I need to get a new copy one of these days, because it’s hard to read when a lot of the pages aren’t attached anymore, but I’ll always keep this one because it was what started one of my first big obsessions. 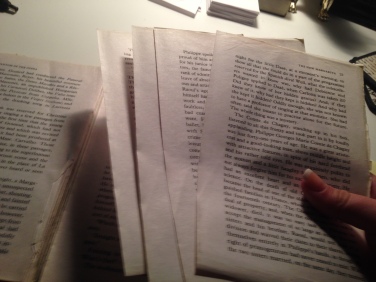 So anyway, I picked this quote because this was the time I remember crying over a book as a child. (Where the Red Fern Grows was the first.) It is from the end of the book, so I guess if you’re freaked out you might get spoiled, don’t read it.

“Then I made her understand that, where she was concerned, I was only a poor dog, ready to die for her…but that she could marry the young man when she pleased, because she had cried with me and mingled her tears with mine!…”

(Those ellipses aren’t mine, by the way. They’re part of the text.) I think this quote just epitomises Erik’s devotion to Christine, and I truly believe that he redeemed himself by sacrificing his own happiness so that she and Raoul could be happy.

So there you go! That’s my day one quote, along with the story of me and one of my first big obsessions.

Today, I nominate the following:

As always, if you don’t want to do it, that’s okay! Additionally, anyone who wants to can participate, although you never know, I still might tag you tomorrow or the next day.

In other news, my desk finally arrived at work so I can feel like an official employee now! I’m so excited! And in other other news, I am so behind on reading posts! I have a bunch of you guys’s interesting looking posts bookmarked to read and I’m going to have to sit down and read them. Maybe I’ll go do that now.